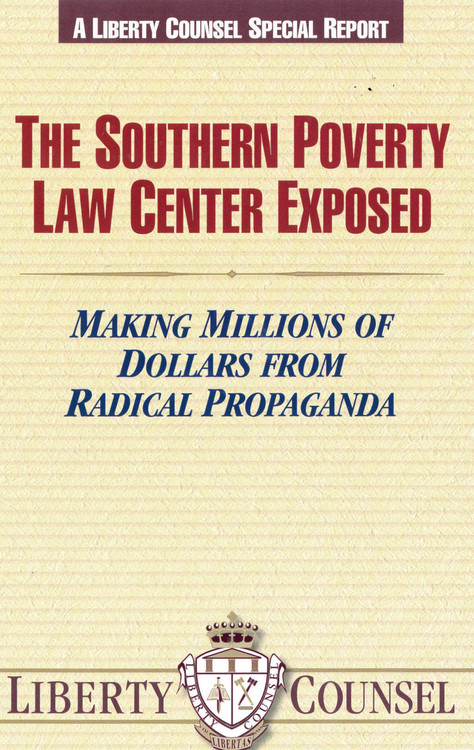 “If you’re a Christian conservative, BEWARE! The Southern Poverty Law Center has its eye on you.”

Located in the Deep South and co-founded by a former Southern Baptist, the Southern Poverty Law Center (SPLC) says it is “dedicated to fighting hate and bigotry.”

Others disagree. “When you get right down to it, all the SPLC does is call people names”, says a researcher of political fringe groups.

Along with calling names, the SPLC does one other thing very well: raise money. Founded in 1971, the so-called civil rights group now has an endowment of more than $300 million. It’s America’s wealthiest propaganda publishing group and most pundits in the media look to it as a leading expert on the “radical right”.

The SPLC’s annual “Hate Map” purports to list all the “active hate groups” and “extremists” in America. Interestingly, they’re all on the right side of the political spectrum. “Our aim in life is to destroy these groups, to completely destroy them,” says a spokesman for the SPLC. It also claims to promote “tolerance”.

And here’s the problem for America’s mainstream Christians…

Long a scourge of the KKK and other white supremacists, the SPLC now lists leading Christian pro-family organizations as “hate groups,” too. It ranks Liberty Counsel, Family Research Council, American Family Association, D. James Kennedy Ministries, and others right next to groups like the Aryan Terror Brigade and the Confederate Hammerskins.

All “haters.” All allegedly groups that traffic in seething prejudice. That’s what the SPLC says, anyway. And that’s what the media dutifully tells the nation.

That’s why you need to get the facts about the Southern Poverty Law Center in this concise, eye-popping exposé. Find out the history, beliefs, actions, and radical ideology that drive the Southern Poverty Law Center. Learn what it does and where it wants to take our nation. Once you are enlightened, you’ll never again be swayed by this radical group’s outrageous propaganda.